Home > Public Services > From research to policy: Advocating for a better future 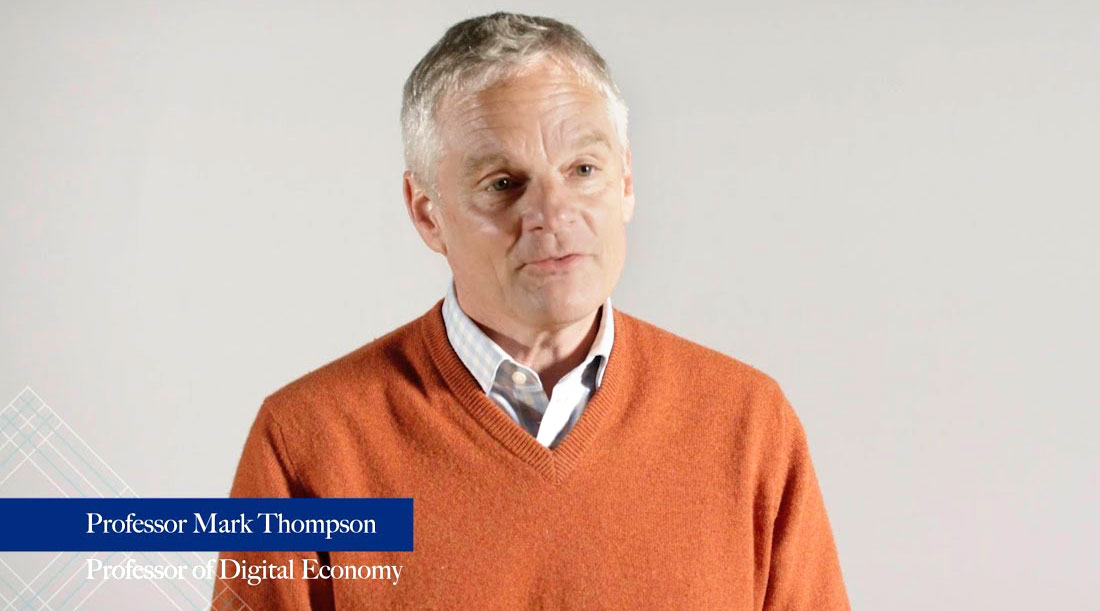 Originally posted on the University of Exeter’s Research and Innovation blog.

Professor Mark Thompson looks at how he started working with policymakers, his work at INDEX, and the importance of being a passionate advocate for your research.

Mark Thompson is the director of INDEX and a professor of Digital Economy. But these are only two of the many hats he wears daily – he is also a business director, policy commentator, government advisor and digital practitioner.

Mark Thompson broke into the world of policy through personal connections. He was soon tasked with writing a foundational disruptive paper setting out reforms needed to improve the use of tech in government – a report now known as the “2009 Thompson Report”.

The report argued that from the £21 billion the UK government spent on tech in the late 90s, 80% of that sum went to only 12 companies. The report also recommended methods on “diversifying standard tech procurement”.

In very simple terms, “diversifying procurement” means opening up the range of suppliers a business works with. For example, if a company works with one supplier for a particular product, they may encounter problems if or when the supplier cannot reach demand – as well as an imbalance of power between government and the supplier. However, if the company works with two or more suppliers, these problems are more easily avoided.

Mark Thompson’s 2009 report suggested that a good way to achieve a more diverse tech marketplace for government would be to adopt common standards across government, enabling it to share and re-use technology, making government smarter and ultimately driving down costs.

This first report launched Thompson’s career in policy. Over the last 12 years, his career highlights include chairing the UK’s National Digital Conference for the last decade, and sitting on two Cabinet Office Advisory Panels, as well as the National Audit Office Digital advisory Panel He has also acted as a Senior Advisor to the Scottish Government. Currently, he is on the board of Tech UK, the UK’s Technology Trade Association.

What is the digital economy?

Digital technology, like your laptop or PC and the internet, has transformed how many of us live. For example, without technology, work, education, leisure and politics would be very different!

Marketing opportunities have skyrocketed with the world bringing out new technological devices, systems, and tools every day. Digital technology has an enormous impact on buying, consuming, trading, and even paying for items and services. Today, the term “digital economy” includes an awe-inspiring range of technologies and their application. It covers:

And more. As a result, a “digital solution” suggests a big scale digital project or ecosystem designed to connect businesses with one another and their consumers.

To provide digital economy solutions, INDEX’s multidisciplinary team works closely with private and public organisations in many ways. Currently, one of INDEX’s largest projects is a £12.4 million UK Research and Innovation (DKRI) centre faced on Next Stage Digital Economy. The project, DIGIT Lab, also collaborates with Oxford Brookes University and the University of East Anglia.

This partnership started with a collaboration. Not on cloud-based tech as you would expect, but on executive education (i.e. business management courses designed for company leaders and managers). As time went on, the collaboration broadened into other areas. Eventually, INDEX was asked to sit on the advisory panel for AWS’s Global Government Transformation Academy – an executive education service for senior government.

And this was just the start! Thompson’s future plans include working with the Digital Strategy Advisory board of Birmingham City Council. He also aims to develop an accreditation with Tech UK to address the country’s technological skill deficit.

My most important piece of advice to early career researchers is to break through the noise and develop a strong opinion. If, as an academic, you’re willing to become an advocate for something, based on research you believe is right, then I think you’re more likely to be picked up.
Professor Mark Thompson

Being an advocate for your research

Over the years, Thompson has become a strong advocate for the use of cloud-based technology. He believes the on-demand computing services – from storage to processing power to applications – will safeguard public services for future generations. He also maintains that policy work is closely aligned with advocacy.

“My most important piece of advice to early career researchers is to break through the noise and develop a strong opinion,” says Thompson. “If, as an academic, you’re willing to become an advocate for something, based on research you believe is right, then I think you’re more likely to be picked up.”

However, as academics will know all too well, research is not always black and white. New evidence surfaces daily. What happens if something you’ve been advocating turns out to be wrong?

Thompson says advocating for something doesn’t mean you can’t change your mind. It may be an uncomfortable experience, but you’ll already have an audience willing to listen to you.

Thompson also acknowledges there is no one-size-fits-all approach to research advocacy. However, he encourages academics, especially those early on in their career, to consider writing in trade journals and explore social media like Twitter (keeping it professional!). He also recommends volunteering to chair practitioner conferences and giving keynote speeches. All these experiences, Thompson says, can provide invaluable insight into writing and speaking for a non-academic audience. They can also, by default, open a lot of doors.

It’s also important to recognise that a particular mental conflict, or cognitive dissonance, can come with being an academic engaging with policy. When also working on impact activities, the constant juggling of different roles and tasks can impact wellbeing.

However, Thompson says, “When I’ve seen academics that look the happiest, they are almost invariably the ones that just do what they do. Whether I’m wearing a University hat, or whether I’m wearing a practitioner hat, or a Tech UK hat, or a policy hat – increasingly I’m just wearing my own hat.”

Thompson’s final piece of advice is to remember that policymakers are “just flesh and blood”.

Ultimately, policies are made up of people and networks. Policy engagement, he continues, is about working on cultivating those relationships without expecting results overnight.

Originally posted on the University of Exeter’s Research and Innovation blog.

Circular Revolution 2021, Driving the Transition to a Circular Economy in Wales

Your Algorithm Doesn’t Know me!