Written by Mark Thompson and Will Venters, London School of Economics and Political Science. Originally posted on Computer Weekly magazine.


The UK government needs to decide what being digital means – and there are a number of options to consider. Policymakers have to choose, if the benefits of transformation are to be achieved

What is “digitising government” all about? There is a lack of collective understanding and consensus about this question. Recent initiatives such as the Digital Economy Council report, AWS’s Government Transformation Academy, and the recently launched Public School of Technology try, in different ways, to encourage senior leaders to spend more time thinking about the business dimensions of “digital”, rather than just technology – in particular, around the role of government itself.

To help address this question, we have published some academic research that identifies a spectrum of very different “plays” for government – but we believe that these roles are often confused by policymakers and industry alike, with adverse consequences.

At each extreme of the spectrum of views, it is obvious there are very different ideas about the purpose of government itself within the emerging digital economy.

At one end, the conversation is about government building digital technology to build better public services, but without making fundamental changes to how things are done now.

At the other end, the aim is to reinvent, or “transform”, the business model of government itself to be a “platform” at the centre of a fast-evolving ecosystem of public, private and third-sector activity.

A slightly provocative characterisation would say that one focuses primarily on product development, mainly in the public domain – a view in which strategy is delivery itself. The other focuses on achieving an interoperable, open architecture as the basis for sharing data, products and services, but cares less where these come from so long as they achieve the public outcomes that we want at the price we want.

The role of government in a digital world

As an attempt to play our part in framing such a national conversation, we have recently published an open-access, peer-reviewed article in the academic journal Government Information Quarterly that synthesises various academic and practitioner literatures, and draws on UK digital initiatives over the last 10 years, to develop a spectrum of possible roles that governments can play in the emerging digital and data economy – from roles approximating “government as software house” to “government as social entrepreneur”.

We note that confusion about the role of government in the digital world is internationally widespread – not just in the UK – and that what might help would be a way to start to think through the characteristics and policy implications of these different roles.

At one end of the spectrum, government sees itself as a kind of software house, leading platform-building projects to integrate cloud-based services, or build its own, that it can then use and open up to other public bodies – UK examples include services such as Gov.uk Notify, Pay, and so on.

This approach isn’t easy – all the hard work needs to be done internally, but it does offer maximal control over the design. As we note, however, a problem can be that it perpetuates the view that government is exceptional and doesn’t need to rationalise parts of its operation to harness others’ standards.

A catalyst of platforms

In the middle of our spectrum, the government sees itself as a catalyst of platforms created by others. In this model, government outsources the risk of development to the market, and drives the creation of ecosystems that others can use. The downside, of course, is that in so doing, it loses control and must accept that others can drive development.

At the other end of our spectrum, government is a social entrepreneur acting as a decentralised partner within a wide ecosystem of players. The easiest way to explain this is with examples such as the Department for Transport’s NaPTAN data platform, or the Financial Conduct Authority’s Open Banking initiative. Here, government allows the market to transform by simply opening up data to the market. Apps such as Citymapper and Revolut can then emerge to chase profits by providing citizens with services using this data.

This approach entails little cost for government, but government will still need to provide for the marginalised and unprofitable services that commercial enterprise will ignore, as well as accepting and managing the consequences of opening up the data.

Here is a summary of the typology we propose: 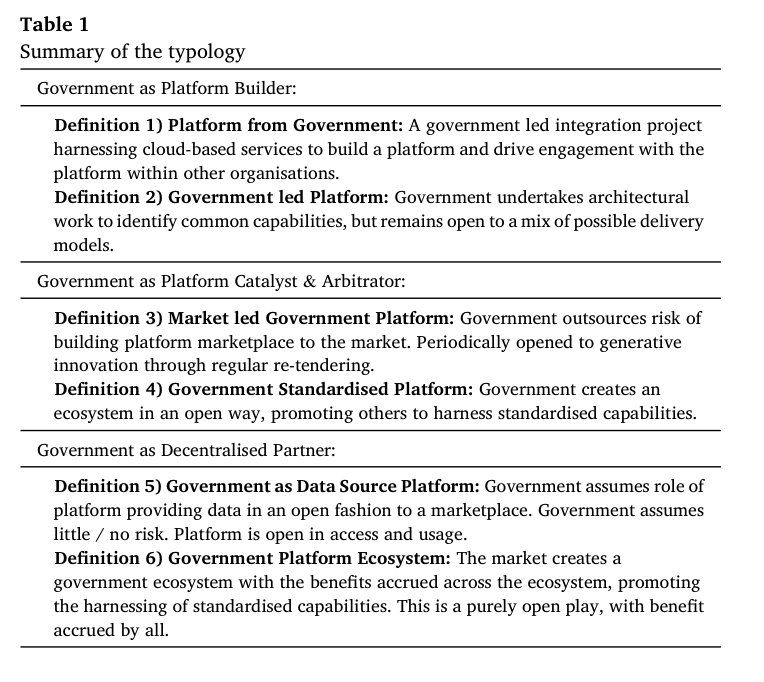 Looking at the range of different strategic plays here, it becomes clear that building consensus about the role of government in the emerging digital economy has political implications, something we were perhaps slow to pick up initially, for which we need a national, collective conversation.

With the acceleration of cloud-based technologies and services, we cannot afford to continue to kick this conversation into the long grass. Yet where are such vital conversations to be had in government? And who is convening them, and building a common view about how they are to be framed?

The three initiatives mentioned at the start of this piece are all recognitions that the technology training we already have within government can only help us with the delivery part of the conversation. But answering the “deliver what?” part requires business-focused education about the role of technology and, in particular, of government, within the emerging digital economy – a view we submitted to the recent Select Committee on Challenges in Implementing Digital Change.

Such a conversation is likely to challenge traditionalists on all sides of the political spectrum. The traditional Left might ask whether there is really public value in an underfunded government-as-software-house when the real future value to the public lies in data, and in public servants.

The traditional Right could usefully engage with the idea of the state-as-social entrepreneur, challenging the “platform capitalists” of Big Tech by staking a claim to ownership, and control, of public data.

Experience suggests, however, that both political parties are too engaged in finding eye-catching digital initiatives that support the short-term election cycle to think through the fundamental politics of, and structural transitions involved in, digital service reform – and that most senior public servants are too busy with day-to-day delivery.

The application of platform models within the public domain offers many attractive possibilities to policymakers. These include economies of scale, crowdsourcing from an ecosystem of innovation/investment attracted by consolidated demand and data, and significant infrastructural benefits.

Fundamental to achieving such benefits, though, is the development of a clear understanding of what is meant by “platforms” – and, in particular, the nuances of the various delivery and commercial models that attract a platform label, focusing on how the role played by government may be strikingly different in each case. Taking the UK as an example, we show in our article that platform initiatives, and associated government roles, vary considerably in strategic and commercial purpose.

We hope that our typology will be useful for policy, planning, funding, execution and evaluation of government platform initiatives. Hopefully, it will help start a wider conversation about platforms’ strategic and commercial objectives, delivery models, risks, governance, roles, incentivisation structures, likely architectures, degrees of openness, and so on – so that these increasingly important debates, and associated choices, move from behind the closed doors of technology departments and out into the democratic open.

Facebook and the Next Stage of the Digital Meta-morphosis

Tough love: a story of stigmatization in crowdfunding communities

Digital Transformation Means Navigating Both Near and Far